In night in year 1999. Potsota and Karub chipped into one house. The window was open at this house. They popped in of the window. There was a bed. Sleeping on my bed was a Mütsika. Potsota and Karub tried to raise Mütsika, but he was too hard. Potsota and Karub were eleven years old. Potsota had an idea. He called the 17 year old Hurda. Together they picked up one cart on Mütsika. They brought the cart to one lagoon. There were fireworks rockets. They fired rockets. Mütsika woke up and saw beautiful fireworks, which was written in 2000. The year 1999 was 2000!

Add a photo to this gallery 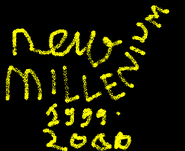 Add a photo to this gallery
Retrieved from "https://loomalinn.fandom.com/wiki/New_millenium?oldid=822"
Community content is available under CC-BY-SA unless otherwise noted.